This is the new cover based on the actors of the tv series. I loved these actors! They did an awesome job on a tough subject and yes there is some very graphic scenes that I was crying my eyes out over. Heck I was crying on almost every episode and generally I don't like stories or movies that make me cry but this really resonated with me.

Here is the original book cover and nope still not read it but I am now that I have seen tv show.

both images from amazon!
No comments:
Email ThisBlogThis!Share to TwitterShare to FacebookShare to Pinterest
Labels: book to tv or movie, High school 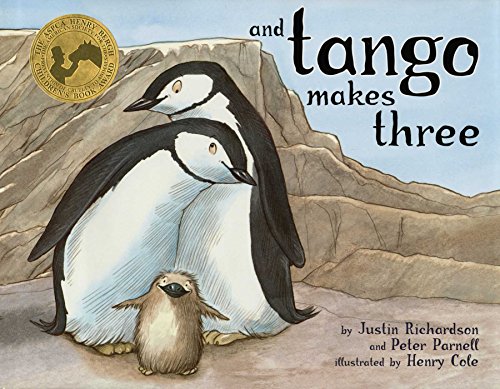 Book Summary:
In the Central Park Zoo two male penguins Roy and Silo hang out together and act like a penguin couple. They even try to hatch their own rock but nothing happens. So the zookeeper puts an egg from another penguin couple in their nest to hatch. The two penguins take care of the egg until it hatches and the zookeeper names the penguin Tango. This was based on a true story.
APA Reference of Book:

Impressions:
I loved the illustrations with the cute penguins. I can see maybe why people have trouble with this story because it is about two MALE penguins acting like a couple. However I don't think most young kids would focus on this and if they do I think they realize any one can be a family. At the end it talks about why the zookeeper put the egg with them (another penguin couple couldn't care for two eggs so it would die) and I think that this compassion for the penguin egg and the way they tried to save it was ingenious.  Overall a good story about families.

Professional Review:
PreS-Gr 3-- This tale based on a true story about a charming penguin family living in New York City's Central Park Zoo will capture the hearts of penguin lovers everywhere. Roy and Silo, two male penguins, are "a little bit different." They cuddle and share a nest like the other penguin couples, and when all the others start hatching eggs, they want to be parents, too. Determined and hopeful, they bring an egg-shaped rock back to their nest and proceed to start caring for it. They have little luck, until a watchful zookeeper decides they deserve a chance at having their own family and gives them an egg in need of nurturing. The dedicated and enthusiastic fathers do a great job of hatching their funny and adorable daughter, and the three can still be seen at the zoo today. Done in soft watercolors, the illustrations set the tone for this uplifting story, and readers will find it hard to resist the penguins' comical expressions. The well-designed pages perfectly marry words and pictures, allowing readers to savor each illustration. An author's note provides more information about Roy, Silo, Tango, and other chinstrap penguins. This joyful story about the meaning of family is a must for any library.

Library Uses:
I think I would use this book in a censorship lesson and talk about why they think people would ban this book. Do they think the book should be banned?

Book Summary:
Poems about the origami creatures a little boy makes in the book and what he does with them after he makes them.
APA Reference of Book:

Impressions:
Very simple poems about the origami creatures the boy makes. The pictures are pretty and bright using different perspectives on different pages. Despite being simple text the poems are great and spark the imagination. It feels like the little boy is talking to the origami animals or the reader. I wish that it had how to make the origami animals in the book at the back! It does give you some suggestions for what books to read to learn more.

Professional Review:
K-Gr 2-- George's 32 brief poems focus on a boy as he folds a series of origami animals and imagines their thoughts and possible activities. Some of the selections exhibit a creative spark, while others tend to take their meaning from the illustrations, which are the real strength of the presentation. The vividly colored acrylics depict the boy actively engaged in play with his creations, and the details that Stringer provides infuse the verses with both energy and humor. Her illustrator's note offers insight into her own efforts to master the art of origami. No patterns or instructions are included, although a useful bibliography is appended to guide those wishing to learn the craft themselves.
~~~~~~~~
By Grace Oliff, Ann Blanche Smith School, Hillsdale, NJ
Oliff, G., Jones, T. E., Toth, L., Charnizon, M., Grabarek, D., & Raben, D. (2005). Fold Me a Poem. School Library Journal, 51(3), 193

Library Uses:
You could include this as a read aloud for different poems. Also as an extension you can have students try and fold basic animals.

Book Summary:
During the Great Depression Jack and his family are having problems. Jack's sister is sick, he is getting picked on, his dad is upset with him, and there has not been any rain. Jack does battle with a rain monster in the barn (did it really happen or is it dust dementia?) and finally it rains.

Impressions:
The washed out watercolors of brown, black, grey, orange, and very rarely red help you envision that you are in the past. There is very little text which also gets across the sparseness of the times. Despite that you can follow what is going on. The battle between good and evil is a little dark so I wouldn't recommend this for younger readers. I really liked how this really captured the despaire and feelings of this time in history.

Professional Review:
Gr 5-7--It is 1937 in Kansas, during the Dust Bowl, and 11-year-old Jack can barely remember a world with plentiful water and crops. Unable to help his father with a harvest that isn't there, and bullied by the other boys his age, he feels like a useless baby. Stories offer a refuge, and there are multiple stories in this work. Jack's mother tells about the time when the land was a fertile "paradise." Jack's invalid sister, Dorothy, is readingThe Wizard of Oz, gaining inspiration from the adventures of another Kansan of the same name. Jack's friend comforts him with folktales about a brave man named Jack who masters nature, battling the King of the West Wind, the King of Blizzards, and the King of the Northeast Winds. In the end, Phelan turns the Dust Bowl into another one of Ernie's "Jack" tales when the real Jack encounters the Storm King in an abandoned barn and finds out that he has been holding back the rain. The boy must then gather the strength to determine his own narrative, as well as his parched town's future. Children can read this as a work of historical fiction, a piece of folklore, a scary story, a graphic novel, or all four. Written with simple, direct language, it's an almost wordless book: the illustrations' shadowy grays and blurry lines eloquently depict the haze of the dust. A complex but accessible and fascinating book.
~~~~~~~~ 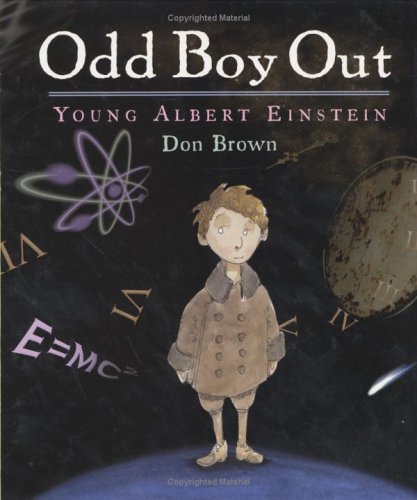 Book Summary:
From the time Albert was born he was odd and different. He was taken with math and found being with others hard but dealing with questions he had and answering them fascinating to him. His life story continues until his adulthood telling about how being different actually helped him with his science ideas. At the end there is an author note explaining a little bit more about his ideas.


Impressions:
Pen drawn pictures with the muddy watercolors helps you think of that time period and when Albert starts to do good things the pictures brighten up a little bit. It kind of gives a dreary or sad feel to the story. I found that the author showed Einstein as a troubled boy and adult but didn't really talk a lot about his positives until the end. I think due to the time period he really was way ahead of his time and was criticized and not given credit due to his religion for a long time. I did like that it showed he persevered through his hardships and being different and didn't let that stop him for questioning and wondering to come up with the theory of relativity. The story was more tell than showing so may be a little dry for students.

Professional Review:
Gr 2-5-- This well-crafted picture-book biography focuses on Einstein's hard-to-classify brilliance, which led to awesome scientific discoveries, but all too often left him a misunderstood outsider. Brown describes his subject's loving, cultured parents who were frequently nonplussed by their son's behavior and temper. He found himself the "odd boy" at school, and as the only Jewish student, was sometimes taunted by other children. He puzzled his instructors as well; though clearly gifted in science, math, and music, he was an indifferent student in most subjects. Brown's pen-and-ink and watercolor illustrations, rendered in a palette of dusky mauve and earthy brown, portray a doubtful, somewhat unhappy-looking child, except for a picture in which he gazes fondly at a compass, a gift that astonishes him as he ponders its mysteries. In many scenes he is marginalized on the sidelines, set apart by color and shading. One dramatic spread features an adult Einstein pushing his child in a carriage, looking small against a backdrop that highlights some of the scientific puzzles that so engaged him. Through eloquent narrative and illustration, Brown offers a thoughtful introduction to an enigmatic man. This book will pique the interest of readers with little or no knowledge of Einstein.
Jones, T. E., Toth, L., Charnizon, M., Grabarek, D., Larkins, J., & Taniguchi, M. (2004). Odd Boy Out: Young Albert Einstein (Book). School Library Journal, 50(10),  138-139.
Library Uses:
Good to use when talking about biographies and inventors. Most have heard of Einstein but don't know why he is important. Also good to read when talking about perseverance, not giving up, and being different.

I have this in my library so good first choice to play!

Ok we all know how hard it is to get boys reading, well this sounds like an awesome video to show weekly to my class of mainly BOYS (14 boys 6 girls and used to be 16 and 6 lol)!!!

***A good read. Get it from the library.

*Skip it there are better books!